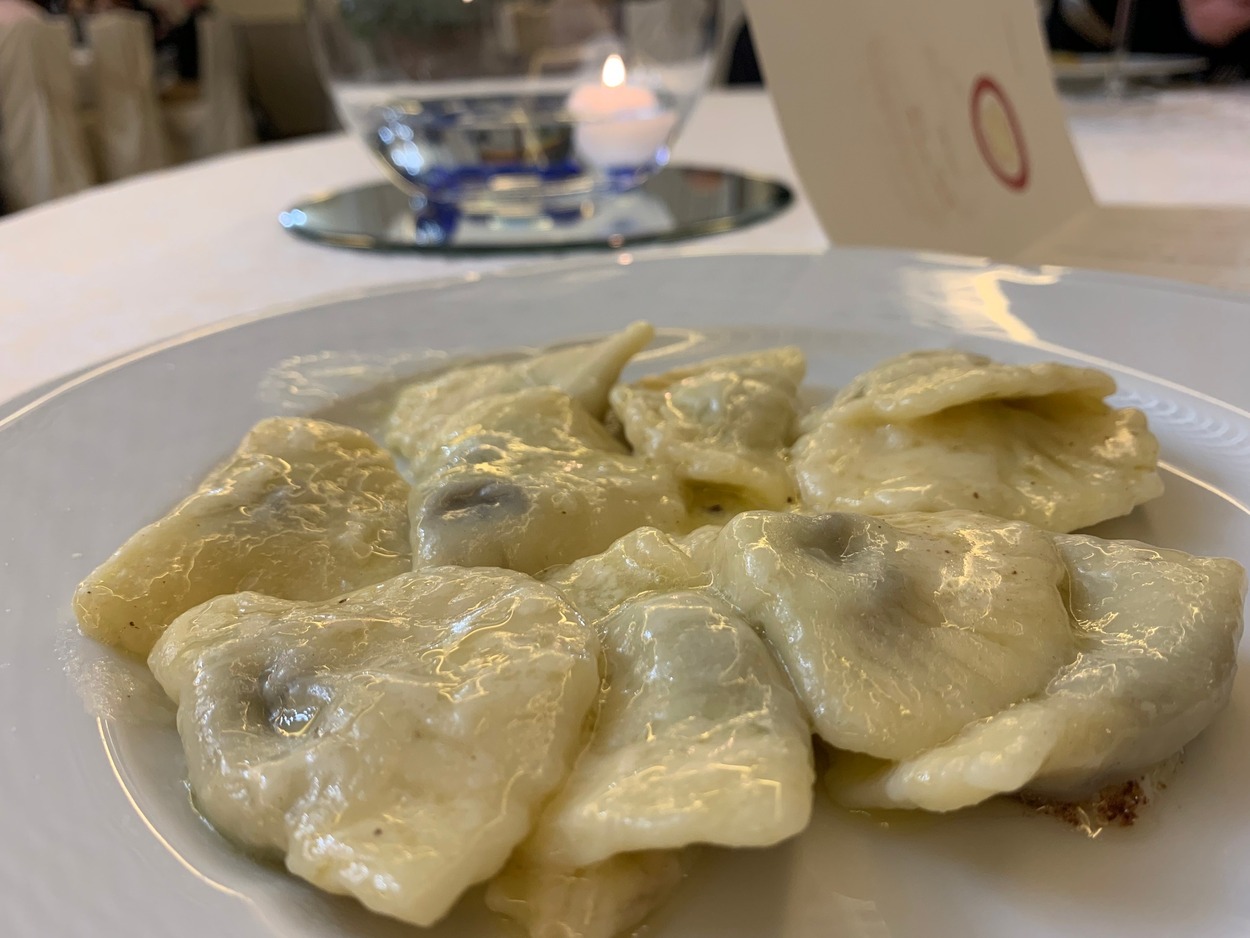 Crema is a city that promises a lot from a gastronomical point of view with a name like that. You can eat very well, and there are several restaurants and pastry shops of all respect, on par with big cities. But let’s be clear right away: there is no typical dessert filled with cream. So jokes such as crème de la crème do not succeed so quickly.

But let’s get back to serious things. We are in the Po Valley, where the cuisine is robust and roots in the peasant tradition.

In the following, I will tell you about some of the typical dishes of Cremasque gastronomy, a sort of minimum wage to taste if you are in town. I will also provide you with some exciting addresses. 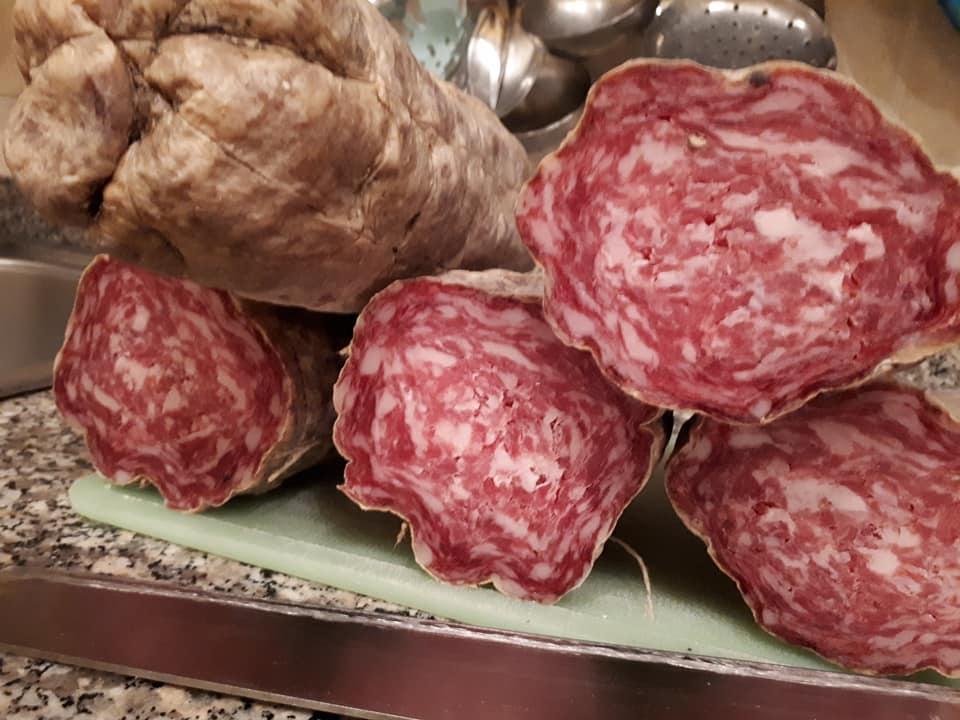 Since we are in a territory where livestock breeding is quite widespread, there is no lack of cold cuts on the tables of the Cremasque. If you like salami, you are in the right place! There are several local cured types of meat coming from small charcuteries of the area that prepare them still respecting the ancient and traditional recipes of the pork butchery of the area.

The king of cold cuts is undoubtedly the Salame Nostrano Cremasco, a salami with a soft texture and an enveloping taste. To produce it, it is mainly made of lean pork meat, which is usually used for other more valuable salamis, to which a part of fat meat is added in a proportion varying from 25 to 35%. Maturing, the last phase of salami production, can last from 4 to 18 months. 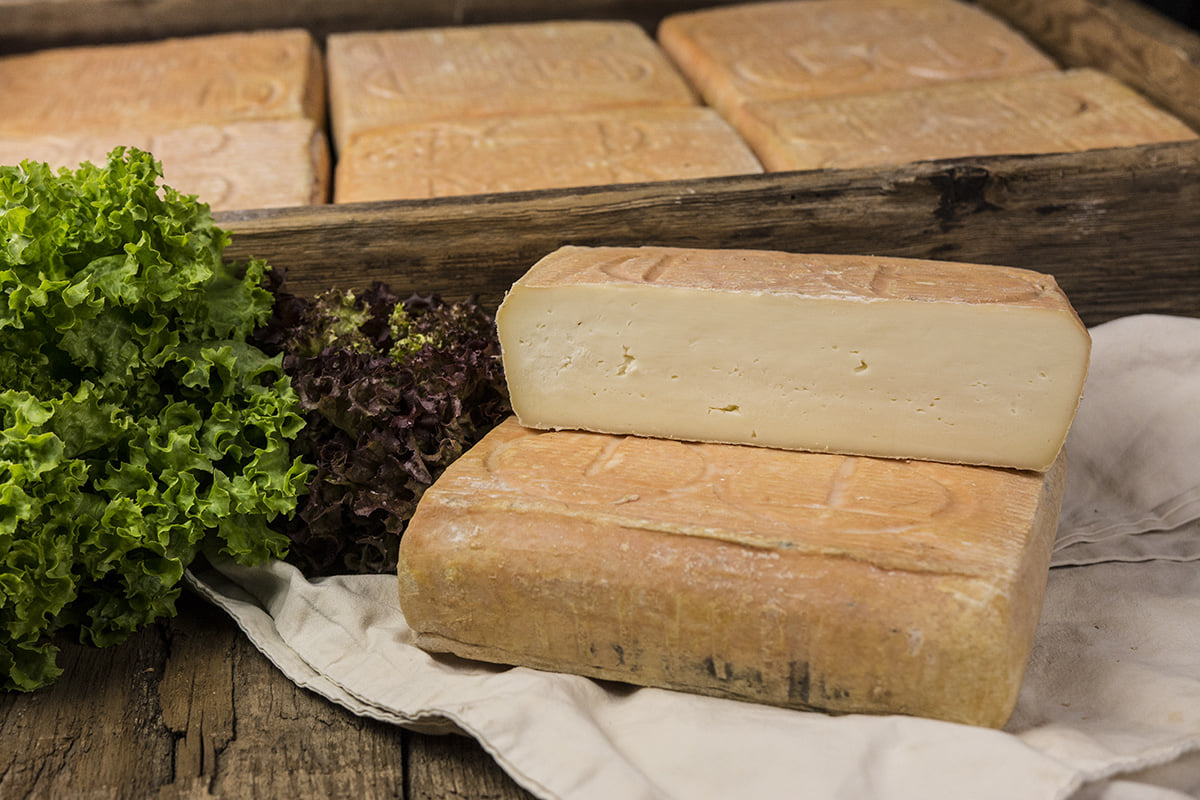 Many cheeses are produced in this area, but the undisputed protagonist is Salva Cremasco, which earned the DOP mark and is protected by a consortium established in November 2002.
Salva Cremasco is a soft table cheese with uncooked paste, with washed rind and it is exclusively produced with cow’s milk. The maturing period lasts no less than 75 days.

Despite the name Cremasque, nowadays it is more often produced elsewhere than in Crema, but it is never missing from the city tables.
Its curious name, Salva, is not the diminutive of Salvatore. Instead, it derives from the tradition of saving the abundant milk of the spring production to make a cheese that could last for a long time, well beyond the summer period.

The perfect match for Salva Cremasco is with tighe, green peppers pickled in oil and vinegar. It is traditionally served this way and if you order it in restaurants as an appetizer or instead of dessert, it will be presented to you.
As we are in the province of Cremona as well as not far from Cremona, it is not rare to find someone who likes to match Salva Cremasco to Cremona’s mostarda.

And now we move on to the highlight of Crema’s cuisine: Tortelli! A curious, mouth-watering, and decidedly unusual first course. Perhaps not for everyone, it must be said, because it is filled pasta… with sweet stuff. But I suggest you try them anyway because you don’t often find such unusual dishes around.

Turtèi, as they are called in these parts, are common only in the towns of the diocese of Crema, that is to say inside what in the past was the Cremasque Territory of the Serenissima: beyond the border it is difficult to even hear about them.

But I have not yet told you what is in the filling! Cocoa macaroons (better if of the Gallina brand), well seasoned grated Grana cheese, raisins, candied citron, mint candies, mostaccini (spiced cookies typical of Crema), egg yolk, grated lemon peel, dry Marsala, broth, breadcrumbs. The doses vary according to the recipe used: there is no official recipe because every town, or even every family, has its own recipe that has been handed down from time immemorial. The ingredients, however, are always the same.
What contrasts this decidedly sweet and spicy filling is the thick pasta that wraps it (prepared without eggs, which has such a pale color) and, above all, the seasoning based on melted butter and Grana Padano cheese both in generous doses.
The shape of Tortelli cremaschi is unique in the Italian gastronomic panorama: a sort of half-moon whose edges are pinched by hand and overlapped to form five ridges.

Pipèto is a traditional Cremasque dish that resembles a meatloaf or a flan. It is a poor and hearty dish made with savoy cabbage, garlic, breadcrumbs (alternatively cheese), butter, garlic, and nutmeg. Given the ingredients, it is eaten in winter, often as an accompaniment to cotechino or boiled meats. 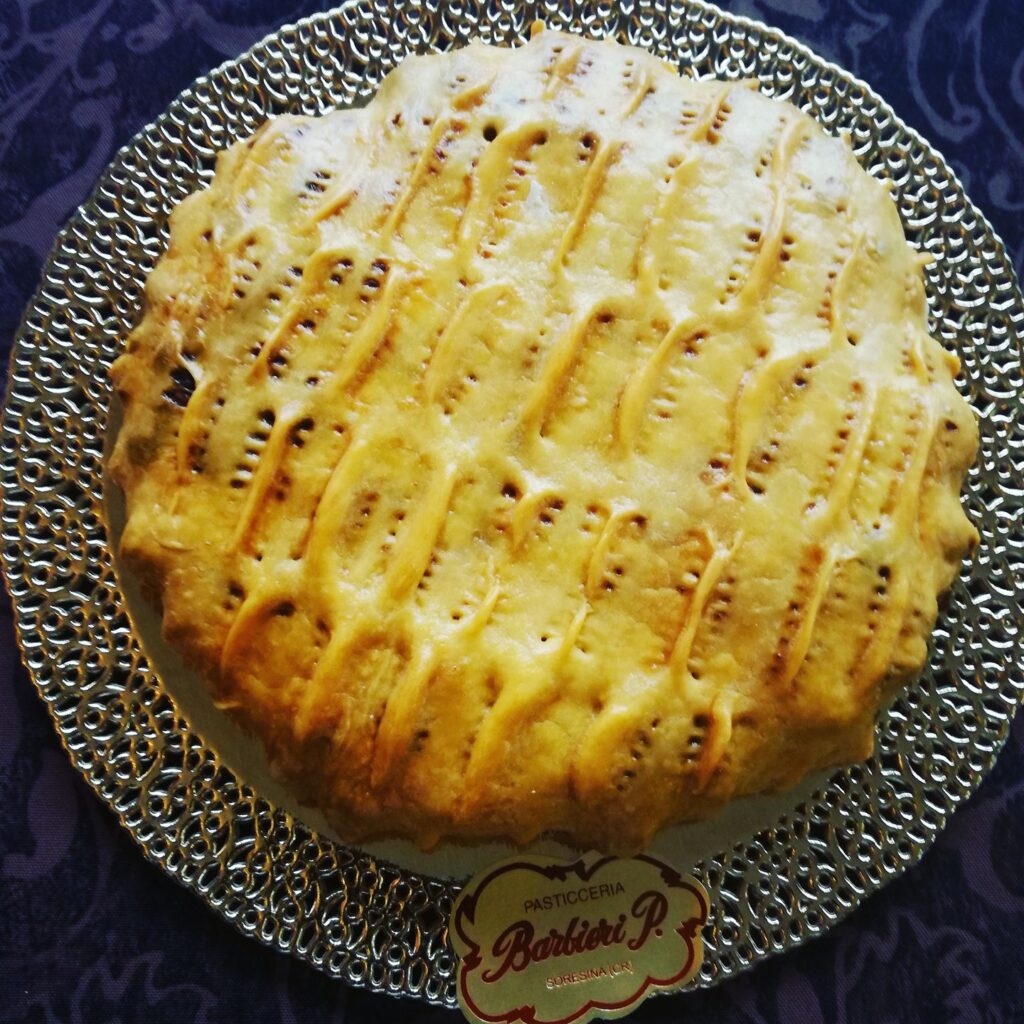 It is a kind of tart completely closed on all sides, even in the upper part, of very ancient origins. The first testimonies date back to 1526 when something very similar appeared in a banquet. This cake turned out to be soft and spongy, and it is just such a characteristic to have inspired the name (from Latin spongia, sponge).

The spongarda is a sweet made from a shell of brisée pastry finely chiseled with a manual pinching (in some places it reads shortcrust pastry) which hides a sweet and spicy filling made of dried fruits (almonds, hazelnuts, pine nuts, walnuts), candied fruit and raisins that are mixed and then combined with honey, apricot jam, nougat in grains and spices (there are those who instead of spices we crumble a mostaccino, the spicy cookie that is used for the filling of tortelli).

The production process is long and laborious, so much so that in 2009 the pastry chefs of Crema joined together in the Congrega della Spongarda in order to protect and promote the spread of the cake outside Crema.

It is a winter dessert, but you can find it all year round in the pastry shops of Crema. I bought it at the Denti pastry shop in Via XX Settembre: a small spongarda of about 300 grams, which we made in two at once, cost me €7.

Spongarda has been included in the list of traditional food products of Lombardy.
Somewhere I read that it is reminiscent of the American apple pie, but I do not particularly agree with this statement: here we travel on much higher levels. 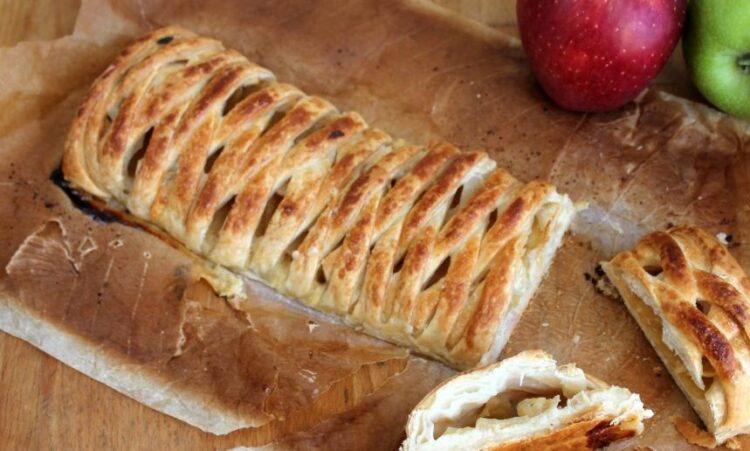 Much younger than spongarda is treccia d’oro (golden braid), born in 1954, which has reached great fame and success in a short time. It is a braid-shaped cake (could you ever have imagined? ) that is made to rise naturally: this is why it remains soft for several days. It is made with lots of butter and enriched with raisins and candied citron and orange at will (there are so many!). A delicious dessert!

The best place to buy it is the Treccia d’Oro pastry shop in Piazza Garibaldi where, among other things, it was invented. It’s not very cheap: one of about 600 grams I paid 18€, but it was so good that we made it in just two days! :-/

I then discovered a curiosity that made my guilt disappear immediately. The raisins are put inside the golden braid not only for a matter of taste but also as a good omen: they represent the money you hope to earn by eating them. Well, if we put it this way… I will soon become rich!

The Bertolina cake is a simple and delicious dessert that can only be found in autumn because it is made with strawberry grapes that are not available before September.
It is not known exactly when it was invented – probably after 1800, before that there is no news about strawberry grapes here in Italy – neither there is an original recipe: there are those who prefer to use the dough for cakes, those who prefer to use the dough for bread; there are those who prefer to put the grapes in layers and those who instead want it with the berries scattered everywhere… The only certainty you have is that, in the period of strawberry grapes, all the windows of the pastry shops and bakeries in Crema have the Bertolina cake on display! And there is also a festival dedicated to it every year, which takes place towards the end of September.
You can buy Bertolina by the slice, which is why I tasted more than one version (I wanted to try both the simpler version from a bakery and the pastry version). To give you an idea of the prices, a quarter of a cake can cost from 4.5€ to 7€.