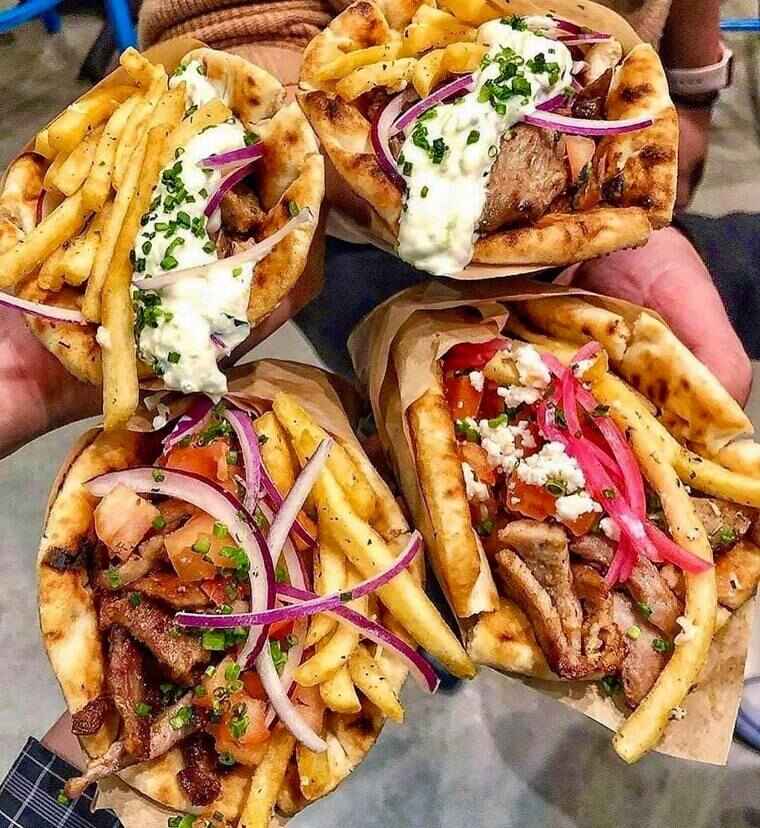 The Greek cuisine of Mykonos is linked to the Mediterranean diet. It, therefore, presents culinary specialties ranging from meat (especially pork and lamb/sheep) to fish (fried or grilled), often seasoned and flavored with olive oil, oregano, tomato, and basil.

It is inevitable not to try feta, the cheese made from sheep’s milk, often found on the table, and it is easy to eat gyros, the tasty Greek sandwich, even on the street.

But let’s see together what are the 10 foods you must try in Mykonos. 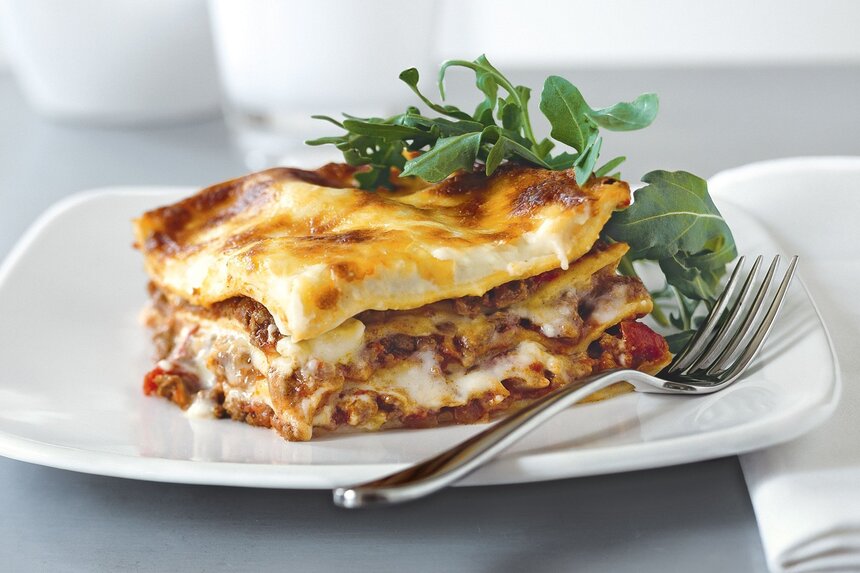 Moussaka is another typical dish from Greece.

It is a flan made of alternating layers of fried aubergines, minced meat, potatoes, and grated cheese, to be cooked in the oven and garnished on the top with a thick layer of bechamel.

It most probably refers to the Turkish influence regarding the dish’s origin.

Very simplistically, gyros can be called the Greek sandwich.

pork meat slowly roasted and stacked on a vertical spit, flavored with many spices. Once the outer part becomes more crunchy, it is cut and placed in the typical bread, the pita, the sauce based on Greek yogurt (the tzatziki), fresh vegetables, tomatoes, and onion. 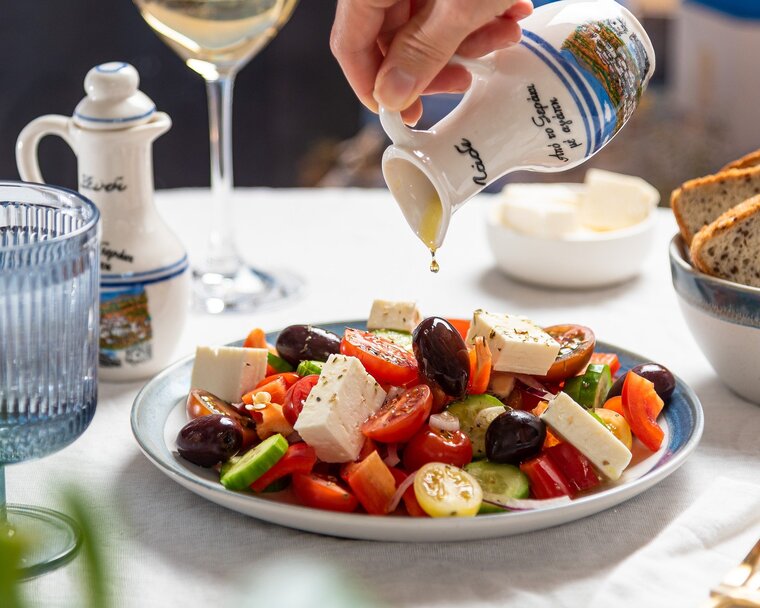 The traditional Greek salad can be eaten both as a side dish and as a single dish, light but at the same time with solid satiating power. 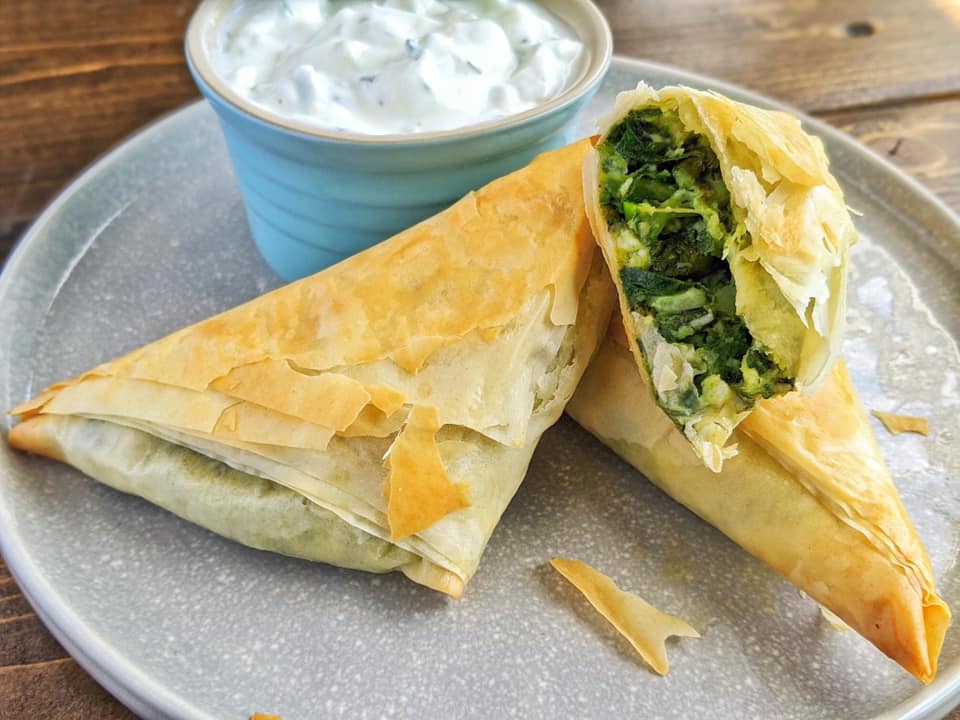 The spanakopitakia are small bundles of phyllo dough filled with feta and spinach.

Following the traditional recipe, the result is a rustic cake cooked in a pan, but at the restaurants of Mykonos, it is much easier to find the bundles, which can also be eaten on the street.

Once again, it is meat, pork, roasted and flavored with numerous spices, pepper, and salt. It is served in skinny slices. It could be called the ham of Greece.

In an island’s cuisine in Greece, fish certainly cannot be missing. The barbouoni is a delicious dish consisting of fried mullets flavored with oil and lemon, accompanied by steamed vegetables.

As for the typical sweets of Mykonos, the amygdalota certainly stands out. These are very soft almond-based biscuits, really, very good.

They are often accompanied by soumada, a liqueur with bitter almonds and high alcohol content.

It is a cake made of phyllo dough, filled with sugar, cinnamon, crumbled walnuts, and butter with honey covering.

It is not an actual dish, but going to Mykonos without trying a glass of the typical liqueur of the area, would be a real shame.

Ouzo is a dry distillate obtained from grape must and anise with a very high alcohol content (40-50 degrees).

It is the typical lamb cooked in the oven with lemon. The term kleftiko literally means stolen. Between the eighteenth and nineteenth centuries, during the Ottoman occupation, the Greek brigands stole livestock to survive in the mountains and cooked the animals inside a hole dug in the ground, then covered with earth. This is to prevent smoke and odors from attracting attention.

Today the idea of cooking meat in foil is maintained at a low temperature and for a long time, together with mixed vegetables, tomato, onion, potatoes, and feta.